We are exploring possibilities. Can Commodore VIC-20s and c64 access the web and use web-based services? Here is a trial made using the VICE emulator, with all the necessary tools to reproduce it. 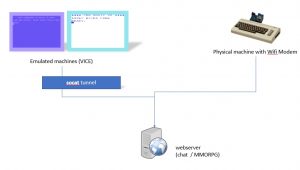 We already know that emulated VIC-20 and c64s can communicate using their virtual RS232 over a TCP/IP connection. If it is possible to make emulated (but also physical) vintage Commodore machines to communicate with a webserver, then we can imagine how it could be having multiple c64 acting like chat clients, or it would be possible to develop a (virtually limitless) MMORPG whose map resides on a central webserver. The schema aside depicts the idea.

On this basis we have tried building a web client to be run on an emulated vintage Commodore machine and, using the socat utility as a connection bridge, we tried to communicate with a central webserver.

Here’s what you need:

Inside the emulator, you Load and Run the software with:

The software asks you for a word, then when you press RETURN, it connects to our test webserver xixi.vic20reloaded.com, sends your word to the server inside the “m” GET parameter, and it gets the server’s reply back, printing it on the screen. 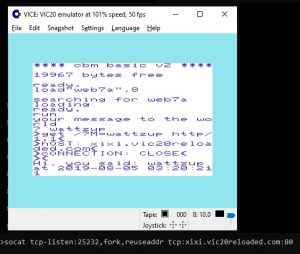 The server will simply echo the word you have just typed in. Before this reply, you will see the headers and the commands actually sent by the emulated VIC to the server.

So: The emulator has sent information out of its box, and received a reply from a website outside.

It is a very simple application demonstrating that both the client and the server are capable of transmitting and receiving bits of information.

This is what the server does (PHP source code):

So it simply accepts a parameter “m” and echoes it back along with a timestamp.

Line 100 asks for a phrase then reads the text for the web call. We use the subroutine at 3000 to replace the dollar sign $ with the word just inputted.

The web GET request is stored inside the DATA instructions (2000-2020) and it is sent out in plain text. We had to explicitly use the CR+LF sequence for it to be correctly accepted – Hence the CHR$(13)+CHR$(10) in the BASIC program’s code, line 130.
Also, since the VIC and the general ascii chart do not match, we had to code a conversion routine (lines 900-1999) so that we can convert the outgoing text for general web-oriented use. In particular, the VIC’s lowercase chars will be seen as UPPERCASE in the web and, on the converse, uppercase chars in the VIC will be converted as lowercase for the web.

Line 232: Only the chars after the asterisk * are printed, so that you avoid seeing all the server’s headers.

Theoretically speaking, if we implemented a bit of user registration, login and some session management then this simple app would easily turn into a multi-user chat system, or even something more such as a multiplayer game.

This is just a simple experiment, not a complete working solution. Nevertheless the possibilities are endless. A few questions remain unanswered

Please comment if you have any information useful for this research, thank you!

2 Replies to “Accessing the web with an emulated VIC-20”